“This threatens Lukashenka himself”

Several thousand migrants from the Middle East have set up a camp on the border of Belarus and Poland. In the past day alone, they tried 300 times by storm to break into the EU. Previously, footage appeared on the Web of migrants throwing bottles at security forces, shooting and shouts were heard in the video. According to Polish border guards, 17 people were detained. The Belarusian authorities accuse their colleagues of inhumanity, in Poland they do not rule out turning to NATO forces for help. 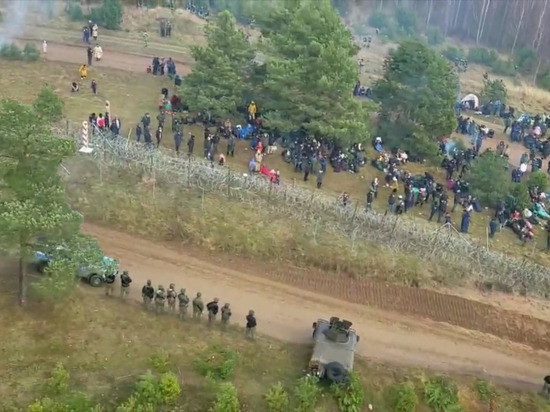 A video with shots of crowds of migrants walking along the Belarusian highway to the Polish border spread around the world media on November 8. The refugees told the journalists that they arrived in Minsk at different times, and their goal was to get to Germany, Belgium or Austria. Polish border guards estimate their number at 3-5 thousand people. The Belarusian side speaks about 2 thousand.

For the Baltic countries, this is one of the most acute phases of the current migration crisis. They intend to defend their borders there. Anti-terrorist units have already been deployed to the border zone. To scare people away, Polish security forces used tear gas by spraying it from the air. However, this only aggravated the situation: the migrants tried to break the metal fences. Now the migrants have stopped in the area of ​​the village of Kuznitsa, not far from the border checkpoint. At night, they set up a camp on this site and lit fires.

Tear gas made some people feel bad: there are pregnant women and children in the crowd. Migrants complain about an acute shortage of water and try to explain that they do not intend to stay in Warsaw. In Belarus, they have already accused their Polish colleagues of inhumanity. In Poland, Minsk is accused of trying to bring the situation on the border to bloodshed and intend to ask for help from the North Atlantic Alliance.

Where did these thousands of migrants suddenly come from in Belarus, who went to storm the Polish border in an organized manner? As experts told us, migrants now enter Belarus in transit through Istanbul, Dubai and Damascus – Minsk has direct flights with these cities. Since March of this year, Belarus has almost doubled the number of flights from the Middle East. According to the German media with reference to the data of the special services, from 800 to 1000 migrants arrive at the National Airport of Minsk every day.

However, such a concentration of people at the border is happening for the first time, and many are wondering what is the reason. Some are sure that migrants have self-organized, since groups with the theme “migration to Europe through Belarus” began to appear on social networks. After first Lithuania and then Poland voted to legalize the expulsion of illegal migrants back to Belarus, they had no choice but to return back to Minsk.

Naturally, the migrants do not plan to stay in the Father's country. People who were unable to cross the border alone or in small groups, allegedly decided to try their forces together. “There is no doubt that the transit of migrants and their arrival at the border in such numbers was carried out with the help of the Belarusian authorities. The reason for the appearance of these crowds of people is that several thousand migrants have concentrated in key cities of Belarus, primarily in Minsk. This has become extremely dangerous for the very system of the Lukashenka regime. Firstly, because worsening weather conditions create preconditions for the growth of aggression towards the surrounding space by migrants. One can imagine that people sleep on the streets, in entrances, at train stations without the means for a normal existence. Naturally, tension is created, which can result in various forms of aggression – robbery and murder, “explained the” MK “ political scientist Pavel Usov .

According to him, this gave the Belarusian authorities the opportunity to strengthen control over migrants by gathering them in one place and directing negative sentiments towards Poland and partly Lithuania. The expert stressed that migrants could not walk such a distance from Minsk or go unnoticed in public transport. In addition, they stopped not at the crossing in Brest, which is strategically important for Belarus, but at the Kuznitsa, which is located away from key transit routes.

The Belarusian authorities use migrants as a lever of pressure on the EU countries, trying in this way to achieve the lifting of sanctions. They have repeatedly reminded that they are able to control this flow if they sit down at the negotiating table with them. And, according to political scientist Valery Karbalevich , the situation for the European Union is indeed difficult.

“As far as negotiations are concerned, this is a difficult issue. I would like to draw your attention to the fact that a conference on the Belarusian issue will be held in Vienna on November 22. In the view of the Belarusian authorities, any compromise is a weakness. And if the EU is ready to make concessions, it means that they are weak and it is necessary to increase pressure, raise rates, and as a result, the EU will falter. That is why this concentration of migrants appeared on the borders of Poland and Lithuania, “the expert explained.

He stressed that the EU is indeed at a loss, the migration crisis has been going on for several months, and the fifth package of sanctions against Belarus has not yet been adopted. “There was no serious answer. And from this point of view, the position of the official Minsk is only being confirmed, “the political scientist believes.

At the same time, Pavel Usov named two scenarios for the development of the event. The first is a forceful one with bloodshed and casualties. The second is the involvement of NATO forces. “If NATO forces move to the borders of Belarus, this may negatively affect the Belarusian authorities. The concentration of such masses on the border, which cannot enter Poland, will create aggression against the Belarusian security forces. People will try to get back to Minsk in order to fly away, or demand transit from the Belarusian authorities to the countries from which they came. This could break Lukashenka's efforts to use migrants in a hybrid war. ”