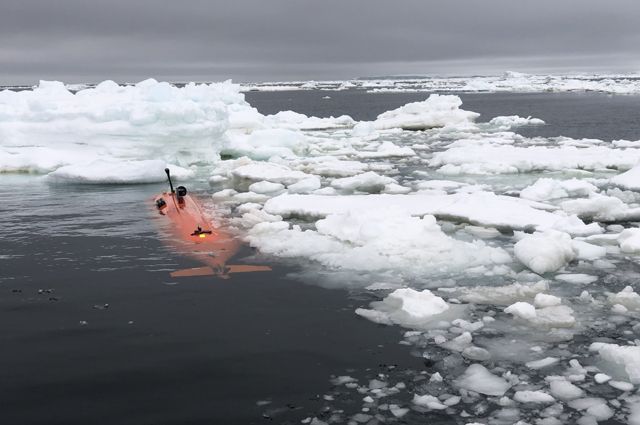 There are areas on the planet that are closely monitored by scientists whose activities are devoted to global climate change and its consequences. One of these areas — West Antarctica. There are two rapidly melting glaciers, which are called “weak underbelly”; Antarctica — Pine Island Glacier and Thwaites Glacier. The latter, with the light hand of journalists, began to be called the “Doomsday Glacier”; — he is known for his fast movement and retreat. This is a huge Antarctic colossus that annually dumps tens of billions of tons of ice into the ocean, which leads to an increase in the level of the World Ocean.

A recent article by an international team of scientists published in the journal Nature Geoscience is also devoted to the study of the Doomsday Glacier.

Twice as fast as previously thought

Specialists led by Alastair Graham, a geophysicist from the University of South Florida, have mapped a pattern of Thwaites Glacier retreat in the recent past. To obtain this information, they launched an apparatus equipped with photographic equipment underwater. He took pictures of the geological relief of the retreating glacier, and scientists based on them built a computer model of what its base looks like. This, they say, will make it possible to more accurately predict its future.

“The Thwaites Glacier sits on the sea floor, only its edge floats in the water. This border, which constantly pops up, is called — line of ascent, or line of overlap. Warm water from the depths of the ocean flows onto the Antarctic continental shelf until it reaches this area, where the glacier melts and giant icebergs slide into the ocean, — explains aif.ru Andrey Glazovsky, Leading Researcher, Department of Glaciology, Institute of Geography, Russian Academy of Sciences. — When the glacier melts, the line of ascent moves further and further, and a trace remains at the bottom. The authors of this scientific work managed to find daily traces of the Thwaites Glacier rising line, left 100-150 years ago. Counting the number of “beds” at the bottom, they came to the conclusion that the rate of its retreat in those years was about 2 kilometers per year. That's double what we're seeing now, although the Thwaites Glacier is still melting faster.

The results of the study suggest that the rate of retreat can fluctuate significantly. This will help to more accurately predict its future. In general, predicting the melting of Antarctic glaciers is not easy. The fact is that there is a very complex interaction with the sea — it does not melt on the surface, but in the sea. We have to take into account the speed of warm currents, and they fluctuate from season to season.

Will all of Antarctica melt?

What scientists know for sure is how much the world's sea level will rise if the Doomsday Glacier melts completely. Estimated to be 65 centimeters. In fact, its volume would be enough to raise it as much as 3 meters, but, fortunately, a significant part of this ice lies at the bottom, being below sea level, so it cannot make any contribution to its increase.

But also 65 centimeters — big size. “This is already enough to flood many coastal areas, for example in the Netherlands, and our St. Petersburg may suffer, — Andrei Glazovsky says — But the problem is not only in the direct flooding of territories, but also in the fact that this will increase the destructive effect of tides and storms — waves will splash where they have not splashed before. So negative consequences are inevitable — social, economic, environmental.

It must also be borne in mind that it is not only the Thwaites Glacier that is melting, it is only part of West Antarctica. Glaciers in this area retreat most intensively, this is a very critical place on our planet in terms of climate change, hence the close attention of scientists to it, hence the pretentious name — “Doomsday Glacier”.

Indeed, Antarctica is the largest contributor to global warming sea level rise. There are hypothetical calculations that if all of its ice melts, the sea will rise by 58 meters. Greenland will give about 7 meters more, that is, a total of 65 meters. Plus 40 centimeters — other glaciers in the world. But this is a purely hypothetical scenario. In the coming millennia, Antarctica will not get rid of ice, of course. But Greenland can. For her, a large increase in temperature is not necessary, a few degrees are enough. That's why its glaciers are melting so fast now.

As for the Thwaites Glacier, its loss, according to scientists, is more than 80 billion tons per year. It contributes approximately 4% of the annual rise in the level of the World Ocean and continues to rapidly recede, which causes concern for scientists.

“Thwaites really only “on the nails” today, — one of the authors of the study, geophysicist Robert Larter of the British Antarctic Survey, told reporters. — We expect big changes in the near future as soon as the glacier retreats behind the shallow ridge in its bed.