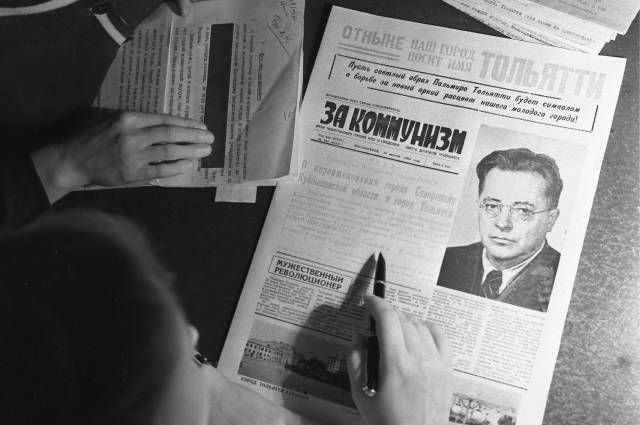 60 years ago, on November 10, 1961, as part of the ongoing anti-Stalinist campaign and, as was customary then to say, “ at the request of the workers ''; Stalingrad was renamed Volgograd.

Former Tsaritsyn and future Volgograd were named after the then leader on April 10, 1925, when the “ workers' intelligentsia '' Allegedly, in a single impulse, she advocated the assignment of the name of Joseph Stalin to the city, although he himself did not support this initiative and advised to name the city somehow differently. On renaming Stalingrad Nikita Khrushchev spoke back in 1956 at the XX Congress of the CPSU, but then about 80% of the delegates did not support him. The matter got off the ground only after the end of the XXII Party Congress. On the initiative of Khrushchev, the Stalingrad Regional Committee of the CPSU on November 6, 1961, put on the agenda the issue of renaming the city. Moreover, not a word was said about the change of the name at the city party conference held shortly before that.

In a hurry, rallies were held at city enterprises. So, at the plant “ Red October '' a notable steelmaker, Hero of Socialist Labor and delegate to the XXII Congress of the CPSU Anatoly Serkov spoke. He told how at the convention “ with special force '' gross violations by Stalin of the Leninist norms of party life were exposed. “ It would be wrong, & mdash; concluded the worker, & mdash; to call our city after a person who has stained himself with great injustice. ''

Meetings in other labor collectives of Stalingrad took place according to a similar scenario. It was officially reported that all residents unanimously approved the renaming of the city. However, according to the memoirs of contemporaries, everything was not so smooth. In particular, the students of the pedagogical institute greeted the news with dissatisfied noise and stamping. By the way, the name “ Volgograd '' was far from the only one discussed by the townspeople. It was proposed to name the city Volgodonsk, Stronghold, Pobedograd, Leningrad-on-Volga, and even quite in Gogol's way: Mirgorod.

The renaming of cities and other settlements in the country began immediately after 1917 and was explained by the desire to get rid of the “ accursed past ''. First of all, this affected those cities whose names were associated with royal power. So, in 1919, the Mari city of Tsarevokokshaisk turned into Krasnokokshaisk, and from 1928 it began to bear the name Yoshkar-Ola. Since 1925 Novonikolaevsk, named after Nicholas II, became Novosibirsk. The next year Yekaterinoslav was renamed Dnepropetrovsk. & Nbsp; It is noteworthy that the city of Alexandrov-Sakhalinsky, named after Alexander II , has retained its name. The Bolsheviks must have shown leniency to the tsar who signed the decree abolishing serfdom.

The renaming process became widespread in the 1920s and 1930s. The old towns and villages were given the names of new heroes and Bolshevik leaders. And the first cities, renamed in honor of Lenin, appeared already in 1918. Then the large old village Taldom turned into the city of Leninsk, and Taldom volost “ at the request of the population '' became Lenin's. It is interesting that in 1930, after another administrative reorganization, there were already two Lenin districts in the Moscow region. And they decided to give Taldom the name Sobtsovsk in honor of Nikolai Sobtsov who was killed in 1918 during the anti-Soviet uprising… With the new name, the city existed for only a few months; it was not approved by higher authorities, who doubted Sobtsov's belonging to the Bolsheviks. The city was returned to its original name.

But the village of Prishib in 1919 decided to abandon its historical name and become Leninsky. At the same time, the status of the settlement did not change; the village was able to be called the city of Leninsky in the Volgograd region only in 1963. I must say that most of the inhabitants of Soviet Russia treated Lenin with great respect and did not object to the renaming of settlements in his honor. This was the case with the renaming of Petrograd to Leningrad and Simbirsk to Ulyanovsk. After the death of the leader of the revolution, dozens of cities in the country and abroad were named after him.

The Bolsheviks changed the names of the cities with revolutionary swiftness. The Ural city of Nadezhdin was renamed several times in the 1930s. At first he was named Kabakovsky in honor of the first secretary of the Sverdlovsk regional committee of the CPSU (b) Ivan Kabakov … When he was shot for “ right deviation, '' the city was given back its historical name for two years. In 1939 he received the name Serov in honor of the deceased pilot Alexander Serov , who was born near these places. The city still bears his name. The Bolsheviks also hurried with the renaming of Gatchina in the city of Trotsk in 1923 in honor of the chairman of the Revolutionary Military Council Lev Trotsky . Six years later, Trotsky, who turned out to be an “ enemy of the Party, '' was expelled from the USSR, and the city underwent a new renaming: Krasnogvardeysk. It became Gatchina again in 1944.

Khrushchev in the struggle for power with might and main arranged tricks with toponymy. When the “ anti-party group '' was defeated in 1957, he decided to remove the names of his opponents from the names of the cities. The city of Molotov again became Perm, and other settlements named after the People's Commissar were also returned to their old names. The small town of Kaganovich in the Moscow region turned into Novokashirsk.

The city of Lugansk began to bear the name of the 'first red officer' Voroshilov in 1935. In 1958, Voroshilovgrad again had to become Lugansk, along with other cities that bore the name of a party leader were renamed. After the condemnation of 'Khrushchev's voluntarism' Lugansk in 1970 was renamed back to Voroshilovgrad. Shortly before his resignation, Khrushchev managed to rename Stavropol-on-Volga in Togliatti in memory of the head of the Italian Communist Party who died in the USSR.

Leonid Brezhnev did not change the tradition of renaming cities in honor of party leaders, both Soviet and foreign. In 1965, Liski, Voronezh region, became the town of Georgiu-Dej in memory of the recently deceased leader of the Romanian communists. The people were quite calm about this whole series of renaming, and sometimes even with humor. When Izhevsk changed its name to Ustinov in honor of the late Marshal and Minister of Defense of the USSR, an anecdote appeared: “ If earlier the competitions in Izhevsk were called 'IZH-Rally', then what should we call them now? '

The last' ; party renaming & raquo; happened already under Mikhail Gorbachev: in 1985 the Siberian city of Sharypovo was named in honor of the deceased General Secretary Konstantin Chernenko (back, “ according to the demands of the workers '', it was renamed in 1988). And the population, as usual, responded with another anecdote: they say, Krasnoyarsk, near which the late leader of the CPSU was born, will be renamed Ust-Constantinople (Chernenko had a patronymic Ustinovich), because there is already one Constantinople (Istanbul) in the world.