Bounty Killer did not hold back on giving his opinion on the violence currently gripping Jamaica.

The dancehall legend speaks out after receiving the news of a shootout that took place earlier today on Trafalgar Road in New Kingston that left two gunmen dead and another in custody. The shootout, which took place at a rather busy intersection in the Kingston 5 area around midday, was captured by a curious onlooker who was standing out meters away from where the shots were being fired.

The “Benz and Bimma” recording artist took to his Instagram account to let his 815,000 followers know just how he felt about what had happened.

“Moments after this took place on Waterloo Rd two likkle mascaraed go meet them Waterloo the little youths them have no rawt_d sense today”, Bounty Killer said. He claimed that merely hours before receiving the news, he had posted the “Crime Stop Crime Crash” video, which is a motivational clip promoting peace and taking a stand against crime.

He showcased his disgust with the current state of the nation as a whole and stated that he would not have bothered to leave Riverton or Seaview Gardens if this is what can be expected after leaving the inner-city communities. The artist then went on to put down those who support persons who engage in criminal activities.

He then continued to show his hatred for these individuals, claiming that persons associated with those who support this type of behavior should also be condemned.

“Is this the Jamaica we all wanted ppl really is it I don’t know about nobody wanted but if this was the life I wanted I wouldn’t bother to leave Riverton or Seaview Gardens then so hear mi all of the Stinking Nasty Duty Rotten Johncrow Skirmish Zaar Criminal deh fi bloodclaath DEAD in cold blood I CARE ZERO,” Killer added. 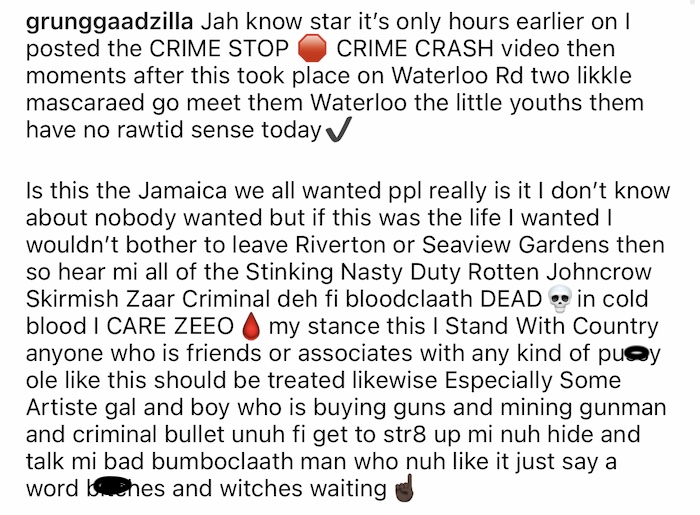 “My stance this I Stand With Country anyone who is friends or associates with any kind of pu**y ole like this should be treated likewise Especially Some Artiste gal and boy who is buying guns and mining gunman and criminal bullet unuh fi get to str8 up mi nuh hide and talk mi bad bumboclaath man who nuh like it just say a word bitches and witches waiting, Killer added.

Bounty Killer has been very vocal in his stance against the crime and violence that has become the norm in Jamaica’s society. He recently challenged the Prime Minister’s view that dancehall music was the main cause of crime by listing other social factors which play major roles in the problem that is currently sweeping the island.

Bounty Killer shared a video of a gathering in Kingston that has left fans dumbfounded about the lack of attention to covid-19 protocols.

It is often said that celebrities sometimes believe they are above the law. Fans are discussing this yet again after Bounty Killer shared a clip of an event he attended to honor dancehall icon Shabba Ranks’ mother, who recently passed. “Tribute to Mama Christie,” Bounty wrote in the caption on Instagram. “Seaview Gardens earlier today.” In the clip, it was clear that the venue was over capacity – at least considering the new protocols for gatherings due to the pandemic. There were well over a hundred people present.

Some fans were outraged and expressed that in the comment section of the post. “No mask that’s why the government can’t trust u guys to open up the entertainment business,” one fan wrote. “I always say the government should open the entertainment business and hold anybody that in control of the party accountable and I guarantee them will make sure the patrons wear mask but no I see why them don’t give u guys that responsibility.”

At this point, it’s hard to tell who hosted the event. Bounty Killer, who is originally from Seaview Gardens, was clearly in attendance as he shared the 12-minute video of the party on Instagram. However, he was no orchestrator. Therefore many are left to wonder how the government would even go about addressing this spectacle if they opt to. 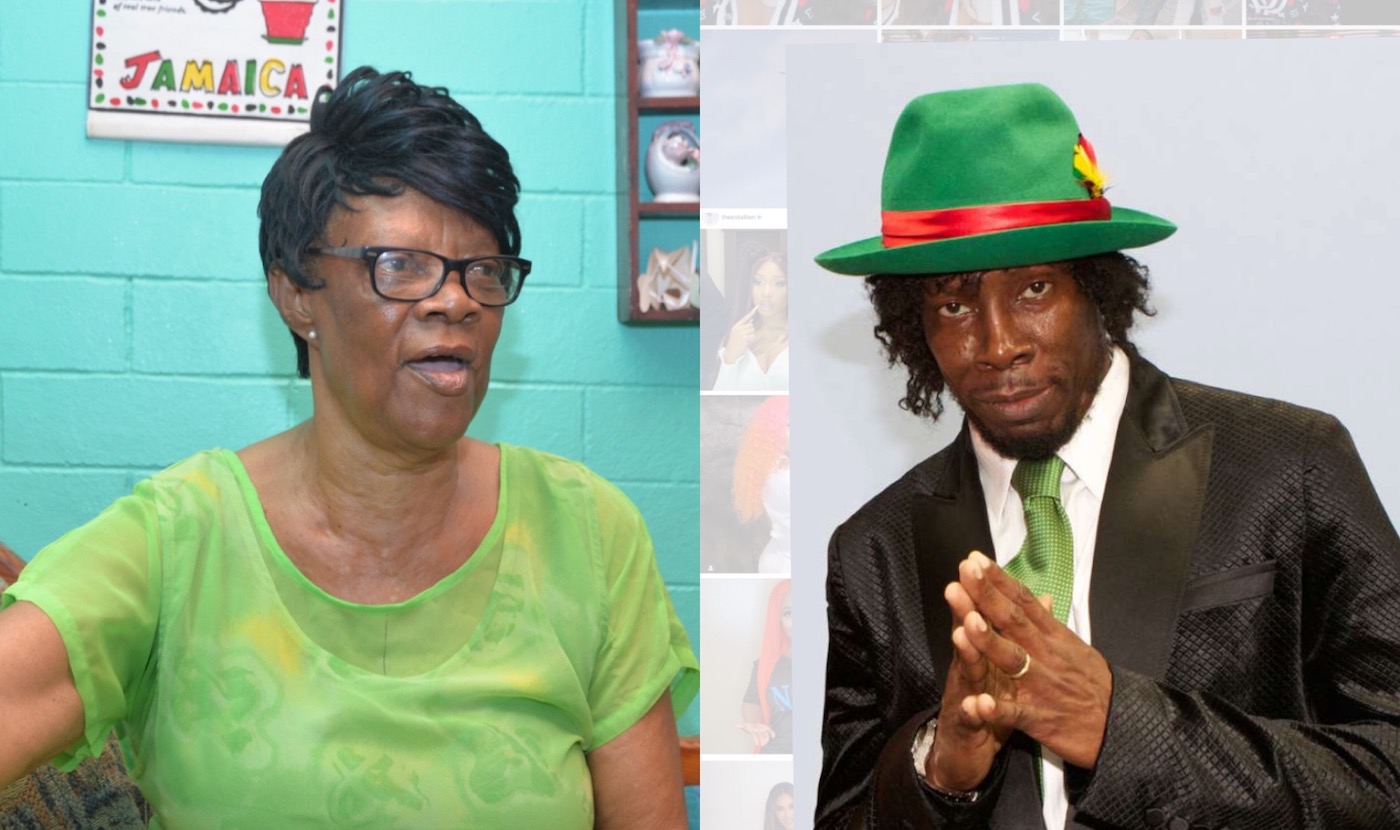 Shabba Ranks’ mom was a well-respected elder of the community who will be missed dearly. That much we can tell from the massive turnout even in these times. It is said that Miss Christie, as she was affectionately known, would often cook for virtually everyone in her close-knit community. Thus she has inspired popular dancehall songs like “Shabba Mada Pot” by Dexta Daps, who is a Seaview Gardens native as well.

Though it would be understandable under normal circumstances why the memory of Shabba’s late mother ought to be honored with an event like this, most fans simply cannot see past the blatant disobedience of the residence who obviously care zero about the spread of covid-19. One fan who saw Bounty’s video on Instagram wrote, “All I see is covid.”

On the other side of the spectrum, there are dancehall fans who overlooked the unmasked crowd and instead celebrated their coming together. “Dem type a love ya we need inna di country, everybody jus support the life of Mama Christie. S.I.P have raised and [nurture] one of dancehall greatest pioneer. Condolences to the family,” wrote one supporter.

Beenie Man was recently charged for promoting and attending an event in Westmoreland where he was scheduled to perform. So have many other people who have breached the Disaster Risk Management and Noise Abatement Act across the country. These recent events might force the government to impose stricter rules to control the spread of the coronavirus.

Do you think the people at the gathering should face the consequences for not only the staggering numbers but also the fact that no one was wearing a mask?