The procedure was not written into the constitution

Mexico recently held a vote of confidence in the president. It was initiated by the head of state, 65-year-old center-left figure Andres Manuel Lopez Obrador, who has been at the top of power for three years. This is an experienced politician who conquered the top of Mount Olympus on the third attempt on July 1, 2018 with a brilliant result, receiving over 53% of the votes. 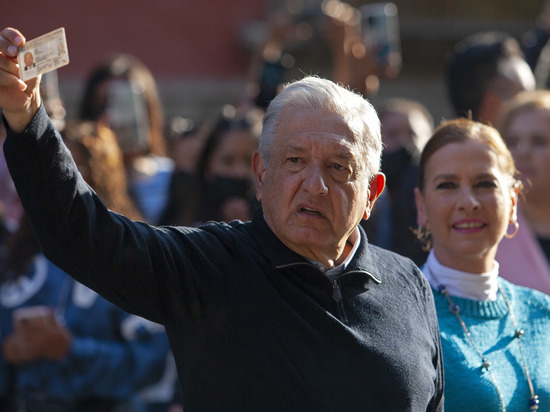 17% of citizens took part in the referendum. According to the first person, he has achieved unconditional success. Now it can expand transforms. Nevertheless, the opposition, which boycotted the procedure, considered it a failure, since the turnout was minimal.

To answer the question of success or failure, one should consider the trajectory of the project initiator. In order to analyze the motives that pushed him to an unprecedented step, it is necessary to make a brief digression into the recent history of this power.

In 1917–1920 a large-scale popular revolution took place there, which ended the dictatorial regime of Porfirio Diaz. In the crucible of the cataclysm, the Institutional Revolutionary Party (IRP) arose, dominating for almost 70 years. It crushed under itself all the structures and institutions of society. Periodically elections were held for legislative and executive authorities in the center and locally. All this was done under the vigilant control of the IRP. The opposition formally existed in the form of dwarf organizations, they did not determine the weather, but served as a fig leaf. Democracy was limited and regulated.

The alpha and omega of the model was that the president named his successor, as a rule, from among the ministers of the interior. This technology was called “dedazo”. In Russian, the expression is translated as “pointing finger.” Everyone was waiting for the wave of the conductor's baton, the rest was a matter of technique. The candidate automatically received unanimous approval at the party congress. Then he became the head of state. The electoral machine functioned flawlessly. The desired result was achieved.

This continued until the student uprisings broke out in October 1968, brutally suppressed with the help of force. These events served as an impetus for the authorities to dosed democratization. An indicator of the shifts was the departure from the principle of “pointing finger”. The pioneer of innovation was Ernesto Zedillo, who was elected head of state in 1994. On the eve of the next campaign, for the first time, he withdrew from participation in the selection of a successor. This contributed to the improvement of the public climate.

In July 2000, an event of extraordinary significance took place. The election was won by 58-year-old Ficente Fox, leader of the Alliance for Change. He achieved a landslide victory over the PRI candidate. This marked the end of her monopoly of power. In the emerging system, the Federal Electoral Institute (FII) played an important role. It has become an authority independent of the other branches of government. A detail of the 2003 parliamentary campaign attests to his authority. The FII fined the party $48 million for misuse of funds during the 2000 battles.

The 2006 elections confirmed the emerging trend. In the fight for the highest post, the representative of the ruling team won, defeating the nominee of the Democratic Revolution Party (PDR) A.M. Lopez Obrador with a minimal advantage. The country was divided into two camps along political and geographical lines. The northern and central-western regions, which are more prosperous, preferred the conservative. Voters in the center, south, and southeast pinned their hopes on the competitor. Acute social problems remained unresolved. This was clearly manifested in the election results.

In 2018, the center-left coalition “Movement of National Revival”, headed by the same A.M. Lopez Obrador, turned out to be at the helm of the board. The veteran of political battles took revenge for the defeats of both 2006 and 2012, when he again finished second. Now he has achieved an unconditional triumph. He slowly, unhurriedly moved to power, learning from previous failures. The president keenly feels not only the elite, sometimes conflicting with it on key issues, drawing closer to ordinary citizens, responding to their needs.

The winner of the race proposed a moderate reform program. It included the protection of the interests of the general population, the eradication of corruption that permeated the entire society, the fight against crime that swept the country, and the creation of optimal conditions for the development of affordable education for all. Los Pinos turned the luxurious residence of the head of state into a museum.

Lopez Obrador holds a balanced line. He establishes a dialogue with the US leadership, strengthens relations with neighbors, does not slip into left-wing radicalism, kindly provided his country as a platform for negotiations between the Venezuelan authorities and the opposition, which have been in a state of acute conflict for a long time. Expands the range of contacts with the states of Asia. Expands interaction with Russia in many areas.

In general, he continues the course towards deepening and expanding democracy, which was positively received by the public. The head of state has already crossed the equator. But, apparently, the president's head is spinning from undeniable successes, which pushes him to unprecedented actions. He held a referendum, not spelled out in the Basic Law. A reasonable question arises. Is he trying to revive the “pointing finger” technology or violate the Constitution? It is possible that a fundamentally different stage of development will begin. The final answer to this fateful question can only be given by the dynamics of the subsequent tense life of this power.

One thing is indisputable. The current head of state does not intend to move the country along the path of the Nicaraguan Daniel Ortega, who endlessly extends his own presidential powers. But that's another topic.