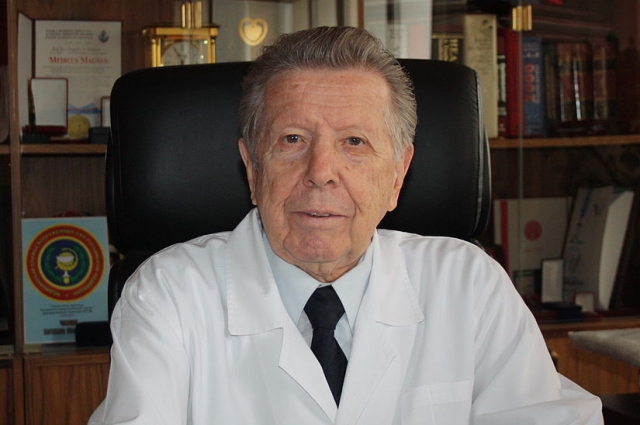 “Outstanding cardiologist and scientist, creator of thrombolytic therapy” about Evgeny Ivanovich, it can be said without exaggeration that he saved millions of lives '', & ndash; the message says.

No cause of death is reported.

In 1953 he graduated from the Kiev Medical Institute, then entered the residency at the department of hospital therapy of the cardiologist A.L. Myasnikov at the 1st Medical Institute in Moscow and defended his thesis of a candidate of medical sciences. & Nbsp;

After that he worked in Institute of Therapy of the USSR Academy of Medical Sciences: first as a junior. then a senior researcher. Later he was deputy director of the institute for scientific work.

Evgeny Chazov is considered the creator of thrombolytic therapy. He was the developer of fibrinolysin, a drug capable of dissolving blood clots in the treatment of myocardial infarction. The cardiologist tested the drug on himself. For this development, Evgeny Chazov was awarded the Lenin Prize in 1982.

In 1963, Chazov defended his doctoral dissertation. His main scientific works deal with the problems of thrombosis and myocardial infarction, myocardial metabolism and circulatory failure. The scientific developments of the cardiologist on the treatment of patients with heart attacks and his approaches to the therapy of thrombosis were widely used in the USSR and the Russian Federation, as well as in Europe and the USA. & Nbsp;

Since 1973, Chazov has been the editor of the journal Therapeutic Archives. & nbsp;

Since 1975 & ndash; Chairman of the All-Union Cardiological Society.

In the 1970s and 1980s, Chazov was one of the initiators of the creation and co-chairman of the international movement “ Doctors of the World for the Prevention of Nuclear War '', which in 1985 was awarded Nobel Peace Prize.

In 1990, Evgeny Chazov again became director of the All-Union Cardiological Scientific Center of the USSR Academy of Medical Sciences. & Nbsp;

Under the leadership of Chazov, a well-known scientific cardiological school was formed, about a hundred doctoral and candidate dissertations were defended. He was one of the founders of the Faculty of Fundamental Medicine at Moscow State University. MV Lomonosov.

& bull; & nbsp; Prize of the Council of Ministers of the USSR;

& bull; & nbsp; Many other certificates of honor and awards, various foreign awards.

The first wife was a resuscitator Renata Nikolaevna Lebedeva . In marriage, a daughter Tatyana was born.

After the divorce, he married Lydia Viktorovna Germanova , who was the founder of preventive medicine in the USSR, professor, doctor of medical sciences. In the second marriage, Chazov had a daughter, Irina, an academician of the Russian Academy of Sciences, currently director of the Institute of Clinical Cardiology named after I. A. L. Myasnikova.

The last wife was the secretary Lydia Zhukova. & Nbsp;