The female crew of the patrol boat “Evgeny Kolesnikov” of the Baltic Fleet will take part in the Main Naval Parade in honor of the Day of the Russian Navy in St. Petersburg. “Raptor” will be part of a group of 47 warships, boats and submarines. 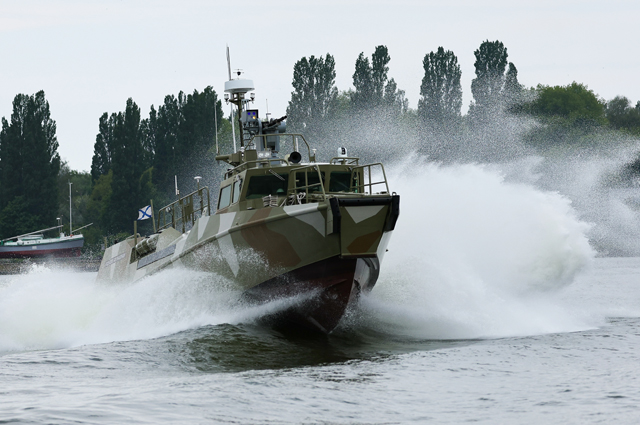 The crew of the boat of the Baltic Fleet also consists of three people &mdash ; boat commander senior sailor Oksana Zabrodina, crew members foreman of the second class Elena Murina and senior sailor Lyudmila Tugolukova. The girls completed a course of theoretical and practical training at the Joint Training Center of the Navy in St. Petersburg — studied the basics of navigation and navigation, the construction of a boat, communication systems and weapons, and a propulsion system. The training course also included training in damage control of the ship, including — with fire and water.

The boat is personalized and named in honor of Major Evgeny Kolesnikov, commander of the marine corps company, Hero of Russia, who died in 1995 during the storming of Grozny.

According to various sources, from 14 to 17 boats of project 03160 are part of the Russian Navy. They are part of the Baltic and Black Sea fleets and the Caspian flotilla. All “Raptors” wear military tricolor camouflage except for one. The boat P-344, formally assigned to the Baltic Fleet, is painted white, the deck is made of teak, in place of the combat module with a machine gun there is a large fairing with an antenna. On board is the number — 001. This is a boat for the top leadership of the country, its permanent base — military landing stage near the building of the Ministry of Defense on the Moscow River. On the day of the Navy, the boat moves to St. Petersburg, and the parade of the fleet is received on it.

Project 03160 patrol boats of the “Raptor” type built at the Pella plant (in the Leningrad region by order of the Navy. Outwardly, they resemble the Swedish multi-purpose boats of the Strb 90H project, which are also known as CombatBoat 90 or CB90. These boats designed and manufactured by the Swedish company Dockstavarvet have been widely used since 1991. The boat turned out to be quite successful and was adopted by a number of states.

Navigation area “Raptor” — the coastal zone of the seas, straits, estuaries during the ice-free navigation period in daylight and at night, with a distance from the base point — 100 miles. Their main task — carrying out patrol service in designated areas of sea areas, interception and detention of small targets, participation in search and rescue operations in areas of duty. These boats are used by anti-sabotage forces and means of the fleet (PDSS). Units of the PDSS — there are several of them on each fleet and flotilla — cover all naval bases and the most important commercial ports of the country. If necessary, special forces or combat swimmers can be on the boat. Such ships can carry out the transfer of 20 marines as quickly and imperceptibly as possible. & nbsp;

The length of the boat is 17 meters, the displacement is 23 tons. “Raptors” very fast, they reach speeds of up to 48 knots — almost 90 km/h. The main armament of the “Raptor” is the combat module “Uprava-Kord”, consisting of a KPVT machine gun of 14.5 mm caliber. It is gyro-stabilized, which makes it possible to conduct aimed shooting in rough seas. Additionally, two Pecheneg machine guns are installed on the boat. caliber 7.62 mm on the sides.